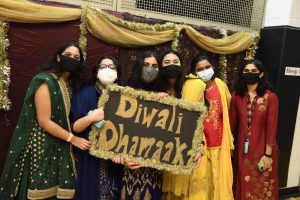 The mission of the Johns Hopkins Hindu Students Council (HSC) chapter is to provide a forum for the student body of JHU to learn more about the ideals and practices of Hinduism. HSC is a religious organization of college students and young professionals that welcomes individuals of all ethnicities and religions. With 75 chapters in North America and several inspired chapters around the world, HSC is the largest Hindu youth organization outside of India. HSC not only aims to foster peace, harmony, and spiritual progress through Hinduism, but also embraces all religions as paths towards universal spirituality.

IGSA was established to promote awareness of Indian culture, provide opportunities for social interactions, and to showcase India as a nation. It has been put together to encourage programs of special interest to the Indian community and to promote healthy interaction between the different communities and members of Johns Hopkins University.

IGSA organizes get-togethers as well as celebrations of some Indian festivals. In addition, it organizes bus trips to places of common interests. Apart from the aforementioned activities, IGSA helps in arranging pick-ups and temporary accommodations for the new Indian graduate students. It is committed to the welfare of Indian students and to fostering socio-cultural and educational exchange among those who have an interest in exploring the Indian culture. The mission is to celebrate the radiant spirit of India and share it with the diverse student bodies at Hopkins.

As a fusion team, JOSH incorporates styles like Indian classical (Bharatanatyam, Kathak), Hip Hop, South Indian Kuthu, and occasionally Bhangra, Raas, and Latin styles as well.  JOSH is a proud multicultural group that consciously aims to reflect the unique cultural identities of members in its set and performances. The group aims to be a safe and inclusive space for members to express themselves through dance.

Kranti is Johns Hopkins’ co-ed South Asian Fusion a cappella group that was established in 2003 with the goal of seamlessly blending both traditional and modern Indian musical forms with contemporary Western songs. The word “kranti,” in Hindi, means “revolution,” and to that end, this group strives to present a unique vocal combination of the East and West in all of its songs.

Shakti is the only competitive Indian Classical Dance team at Johns Hopkins University. Since 2003, the dancers of JHU Shakti have excelled in precision, and hold dear the value of our classical Indian dance forms. As a competitive team, Shakti won Mayuri 2013 at UMD and received third place at Dhirana 2016. The team dedicates their time to the mastery of expression, hand movements, and footwork, and seeks to convey a powerful story through classical dance to all audiences. The members of Shakti each bring a variety of classical dance styles to the team and meld them into dynamic performances featuring traditional steps set to fast tempo beats, complex formations, and moving narratives.

The primary purpose of South Asian Students @ Hopkins is to engage in activities designed to preserve, promote, and share South Asian culture among students of South Asian origin and with the greater Hopkins community.

Zinda aims to synthesize Western and South Asian dance styles while promoting awareness of South Asian culture both on and off campus through performances and workshops.